Reclaiming Child-Like Awe and Wonder in the Face of Suffering


The willingness to return to the child-like awe and wonder of Life in spite of the trials and tragedies that beset us in our lives is one the greatest defenses we have against the snares of resentment and self-pity. It's voluntarily returning to the paradise and innocence of Eden, but this time with the intelligence and wisdom gained through our struggles on earth. It is standing uprightly and boldly before God, in spite of the scars we bear in our nakedness because we are confident in His Love.

The Buddha teaches that life is suffering. That is true. It's when we are open to reconciling that suffering with God we receive a deeper measure of Love and a greater understanding of the pain. Those who surrender themselves to the hands of God see God's hands in all things. They evolve through their trials. They can appreciate life, the good and the bad, much more deeply because they comprehend the meaning of the experiences. They can experience the highs of life in fullness because they've sunk low enough to discover their foundation in Jesus Christ. They can love deeper because they are acquainted with grief and familiar with sorrow.

If we chose to see and appreciate the transcendent beauty of life in the face of suffering and struggle, maybe we would see God. We would see light and be filled with that light. The world would shine brighter through our light instead of darkening though our resentment. We could reclaim our child-like awe for life and bring Heaven on Earth.
Posted by Khaden Reed at 8:25 PM No comments: 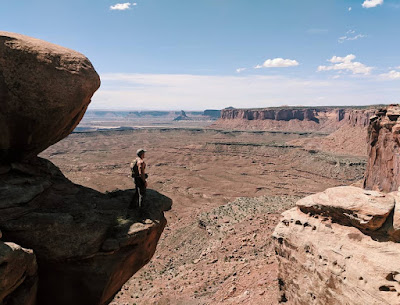 Sometimes in order for God to show us our foundation, He will need to wash away the muck in our life. That process can spiral us towards rock bottom, but that is the rock we need to build upon. That process of washing is usually full of painful disappointments. I've learned we can react in two ways to Life's painful lessons:
1. Shut off the pain by closing off our heart. This will cause us to grow resentful and bitter towards life, darkening our eyes to only see meaningless suffering, making us feel as the ever victim to life's injustices. Hate will consume us.
2. Opening our heart to God. This will cause us to feel even more pain, but that pain lets us know that our heart is still alive. Suffering will have meaning and we will see God's hand in every trial. Our appreciation for what is good, true, and beautiful will deepen and Love will envelop us.
Posted by Khaden Reed at 8:23 PM No comments: 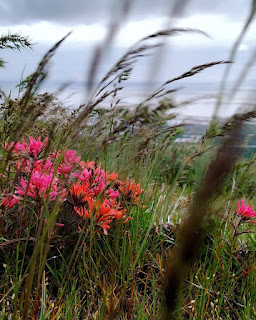 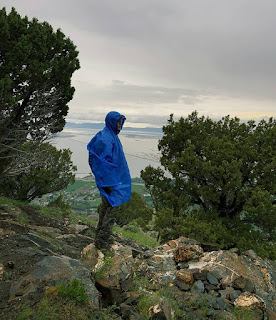 Rauch- In Hebrew, it means breath, wind, or spirit
Ruach can be soft, gentle, and reassuring as it caresses you through the cool breeze of day, singing the warm melodies of spring and summer
It can scorch and leave lands barren with the dry heat of a drought, invading cities with the oppressive dark haboobs of the desert sand
Ruach can call you to adventure, inviting you to pursue your personal legend while carrying with it the scent and song of true love
Or as it did on this peak, Willard's Fin, AKA Lighting Rock, it can chill your face sending shivers down your spine while nearly knocking you down to your knees, deafening you as it roars it's magnificent and awesome power
These pictures may seem pretty peaceful and serene, and the majority of the hike up was. But as we approach the top things became suddenly intense. I think between the snowmelt which created many rapid rivers down the mountain face, the fresh ongoing rainstorm, and the shape of Willard's Fin it was a perfect environment for fierce and fridged gusts of air to encircle us up on "Lighting Rock". We could not hear each other over the chaotic roar of the wind. The wind chill was so cold that my phone kept dying despite it being fully charged. Major photo credit to @parker1349 , he was about to collapse because of the crushing force of the wind making it hard to stand and difficult to breathe, yet he still managed to get some awesome shots.
Live from the breath of Life
Fill yourself with the Spirit
Let His winds carry you
Embrace and inhale the ruach of God

Parker and I went up to Willard's Fin to commune with and worship God.  Hiking up mountains has become a normal thing for Sunday Sabbath Day observance.   At the top the wind was so powerful and chilling Parker couldn't spend too much time and had to descend before me.  I spent some time alone in the roaring wind.  I began to pray to God about my particular issues and offerings.  As I did the winds ceased.  When I ended my prayer the wind resumed its mighty roar.

I met up with Parker little ways down the fin.  We found shelter among the rocks and trees around the spot the last photo above was captured at.  Despite the covering, the wind was still deafening (Well maybe not for Parker ;) )

Parker mutter the word "Ruach". At that precise moment, the wind roared through the trees and rocks, louder than what we experienced at the fin.  It shooks and startled us.  It was so sudden and grand that it left us speechless for many seconds as we processed what just happen.  We then burst into laughter! 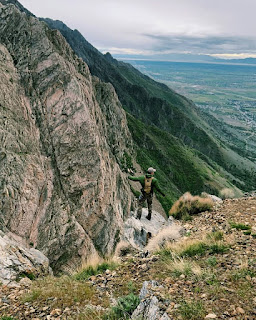 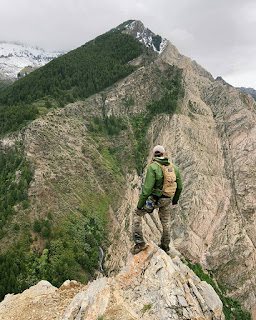 Posted by Khaden Reed at 8:19 PM No comments: 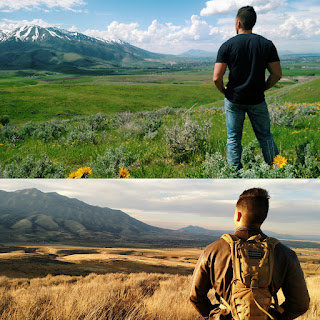 I love how Mother Earth changes. I love how the moon that dances around Her is constantly waxing or waning, leaving time for dark nights of epic star gazing or serene moonlit evenings. I love observing the passing of Her seasons, appreciating all the diversity of Her unique beauty that can only be celebrated in specific seasons when conditions are just right.
Life is constantly moving- constantly progressing into something more through creation or decaying through entropy. Nature is a constant state of change and transformation and if we want to engage Life we need to learn how to embrace change and transformation ourselves. Acknowledge the season of life we are in and seek to understand how we can develop through it the fullest.
I moved to Cache Valley at the end of fall. I left at the start of spring. I had plans to enjoy the summer outdoors this place has to offer, but Life is taking me elsewhere.
Logan is known for it's fridged winters, and I resided here through those dark cold months. In that time I experienced many struggles and wrestled with my own darkness many times. However, I was never alone in it. I had my best friends and I had my God, Jesus Christ, in every difficulty. My time in Cache Valley was not what I expected it to be like, but it was beautiful none-the-less. I value what I learned and discovered here in the dark and cold time, blessing both the positive and negative experiences as beneficial. I hope to take that experience and light into the brighter days and warmer seasons Life has in store. 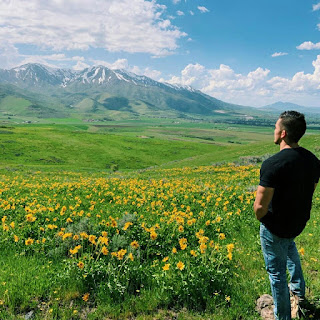 Posted by Khaden Reed at 7:51 PM No comments:


The space that couples create for each other needs to have God within it or else we idolize our partner in that relationship. If we derive our identity and power from them instead of our inner relationship with God then it leads to resentment, frustration, and anger when the fixation of our happiness (our significant other) reveals it's imperfect, ungodly, and human flaws. No one is perfect. There is no such thing a perfect man or perfect woman because we are all flawed in this fallen world. So I think it is so important that a couple be not ashamed of each other's nakedness. (vulnerabilities, insecurities, flaws) and embark on the journey of healing together. We are all naked before God. We can't stand boldly before Him if we are too concerned with cowering in insecurity and crafting the fig leaves of our perfect facades when He comes looking for us. If we can learn to be comfortable and open in our brokenness with the people we are closest with in this life, and truly be known by them for our beauty and our messiness instead of fearing their judgment and rejection, then maybe it would be easier for us to approach God in our own brokenness. Maybe the path to the Kingdom of God is not a graceful elegant solo dance through the gates of paradise while the angles applaud for us. Maybes it is more of an ongoing goofy and awkward stumble with the people we come to love and the only way we can make it is if we are to bear one another's burdens. And we can't bear one another's burdens unless we are willing to disrobe our baggage and be seen in our vulnerability.


We [men] have shame, we have deep shame, but when we reach out and tell our stories, we get the emotional shit beat out of us." And he said, "And before you say anything about those mean fathers and those coaches and those brothers and those bully friends, my wife and three daughters, the ones who you just signed the books for, they had rather see me die on top of my white horse than have to watch me fall off."

"I've come to this belief that, if you show me a woman who can sit with a man in real vulnerability, in deep fear, and be with him in it, I will show you a woman who, A, has done her work and, B, does not derive her power from that man. And if you show me a man who can sit with a woman in deep struggle and vulnerability and not try to fix it, but just hear her and be with her and hold space for it, I'll show you a guy who's done his work and a man who doesn't derive his power from controlling and fixing everything."

-Brene Brown, "Men, Women, and Worthiness" two excepts from that audible production. Listening to it a third time ans still learning so much. Would highly recommend.

Posted by Khaden Reed at 7:45 PM No comments: