The Second and Sure Nail Through the Institution

5 years ago the Russel Nelson (now LDS president) had a true servant of God, Denver Snuffer, excommunicated for speaking the truth about church history and defending Joseph Smith in a way that promoted faith in the Gospel of Jesus Christ instead of faith in brethren. This servant of God was excommunicated for doctrinal issues.
Now Sam Young, a warrior, and defender of the children, is being excommunicated. Like Denver, like Abinidi in the Book of Mormon, Sam will be brought into a court to be exed for speaking the truth instead gratifying the pride of, and promoting faith in, the leaders of the institution. This time, however, the issue leading to charges of apostasy are not doctrinal, they are moral issues.
Not only has the Corporation of the President of The Church of Jesus Christ of Latter-day Saints lost true doctrine, it is losing its sense of morality. Protecting children ought to be common sense, but pride has broken that moral compass. The excommunication of Sam Young will be the second and sure nail that the LDS church has completely apostatized from Jesus Christ.
Jesus had some pretty strong words to say about offending little children. What I'm about to say is most likely way beyond your comfortable known world, but Satanic rituals are a real thing, and they involve offending little children. Why do you think child sex-trafficking and child pornography seems to happen a lot in powerful and influential organizations like Hollywood and the Catholic Church? Do you really think that men are just simply sexually attracted to young kids, or is there a power that one can obtain through Satan through the manipulation and exploitation of the divine innocence of a child? Maybe Christ was so harsh when the describing the state of a child-offender because the scope of that sin is far more malevolent and satanic then we understand.
Those who are a tune to the spiritual reality are aware we are in a fallen world at war. Perhaps the scope of Protect LDS Children is far larger than we think and the ramifications of ignoring it far more detrimental to the church than we comprehend. Maybe God inspired Sam Young in order to clean up the church to prevent Satan from gaining strongholds in the organization, and by rejecting a true servant of God, we, therefore, reject God and the protection He is extending us if we would repent.
When we have a relationship with Christ we have a bond with Christ. When you are a member of a church organization and have obligations to it you also have a bond with that church. If Lucifer gains footholds in that institution, ownership shifts and a threeway bond is formed between the Devil, Jesus, and you. Who you serve is who you will receive guidance and revelation from. Best to make sure you only serve one Master. You will know them by their fruits: 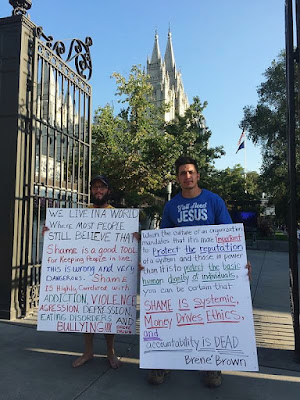 "When the culture of any organization mandates that it is more important to protect the reputation of a system and those in power than it is to protect the basic human dignity of the individuals who serve that system or who are served by that system you can be certain that shame is systemic, money is driving ethics, and that accountability is all but dead.


This true in corporations, non-profits, universities, governments, faith communities, schools, families, and sports programs. If you think back on any major scandal, fueled by cover ups you’ll see the same pattern, and the restitution and resolution of cover ups almost always happen in the wilderness when one person steps outside their bunker and speaks the truth."


Sam Young's excommunication is not a declaration of his spiritual death, it is the testimony of the total demise and apostasy of the institution that rejected the message.  There are three aspects of proper being know as the transcendentals: The Good, the True, and the Beautiful.  The Truth has been rejected, the Good villainized.  Mercy has been extended long enough.  The Lord will have no more of it.  The Beautiful will be stripped away and lost.

The sun has set upon the corrupt corporation.  Membership will not bring you closer to God.  Only Jesus Christ will bring you closer to God.  There are save two churches only.  Which Church will you belong to? No man can serve two masters.  You determine your loyalty and your church through the master you choose to serve.  Pray diligently to God for direction on how you can best serve the Lord, Jesus Christ.

Some other Good blog post to check out regarding these things:

Apostasy Never Came by Renouncing the Gospel, but Always by Corrupting It

A warning to the people of Salt Lake Valley
Posted by Khaden Reed at 11:17 AM