My Take and Reaction to the 2017 Signs 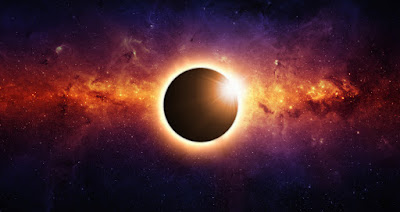 I find it incredible that although the sun's diameter is about 400 times larger than that of the moon – the sun is also about 400 times farther away.  So the sun and moon appear nearly the same size as seen from Earth.  It allows for a perfect eclipse.  God designed it this way so that the lights in the heavens (the sun, moon, and stars) can be for signs. (Genesis 1:14)

In 1776 a solar eclipse took place during the same year our nation was born.

We read in the scriptures that covenants or cursings pronounced on groups of people usually last unto the "third and fourth" generation.  Back in 1776, the average life expectancy was about 40 years.  Today in 2017 people live to be 80+ years.  Given the advances in healthcare that have taken place since the Revolutionary War, the average life expectancy between then and now is a little less than 60 years.

If a generation is measured by 60 years, 4 generations have passed since we declared independence.

And he had sworn in his wrath unto the brother of Jared, that whoso should possess this land of promise, from that time henceforth and forever, should serve him, the true and only God, or they should be swept off when the fulness of his wrath should come upon them.
And now, we can behold the decrees of God concerning this land, that it is a land of promise; and whatsoever nation shall possess it shall serve God, or they shall be swept off when the fulness of his wrath shall come upon them. And the fulness of his wrath cometh upon them when they are ripened in iniquity.
For behold, this is a land which is choice above all other lands; wherefore he that doth possess it shall serve God or shall be swept off; for it is the everlasting decree of God. And it is not until the fulness of iniquity among the children of the land, that they are swept off.
And this cometh unto you, O ye Gentiles, that ye may know the decrees of God—that ye may repent, and not continue in your iniquities until the fulness come, that ye may not bring down the fulness of the wrath of God upon you as the inhabitants of the land have hitherto done.
Behold, this is a choice land, and whatsoever nation shall possess it shall be free from bondage, and from captivity, and from all other nations under heaven, if they will but serve the God of the land, who is Jesus Christ, who hath been manifested by the things which we have written.
(Ether 2:8–12)

The way I see it is that the United States has a lease from God on this land.  The duration of that "contract" last 4 generations and can be renewed, or the inhabitants must be vacated so that the land can be given to another people who will honor the terms and conditions God has enacted.  The terms and conditions are the Book of Mormon, and if you are a gentile, you need to comply with the conditions that Jesus Christ has laid out for you in 3rd Nephi chapters16-30, or you will have no promise or hold to this land and be swept off.

Additional insight: I think its also interesting to note that in 1620 the Pilgrims established a Colony on North America.  In 2020, 3.5 years between the two eclipse, it will mark 400 years of Native Americas under European/Gentile sovereignty.

I was in a fellowship this last Tuesday and my friend shared some interesting observations concerning the Eclipses.

On Aug 21, there will be a solar eclipse that crossed America.  No other land mass will experience the eclipse other than the US. The 2017 eclipse exits America at Charleston (Fort Sumter) South Carolina. If you read D&C section 87, it deals with Joseph Smith's prophecy about the civil war. However, its language suggests that it’s prophesying about much more than just the civil war.  Fort Sumter was the location that started the civil war.  It has symbolized the divide between the North and South, it now marks the end of the sign (2017 eclipse) that may be pointing to the greater divide when "war will be poured out upon all nations" according to section 87, and according to current visionary experiences people are having.

The eclipse of 2024 happens on April 8, 2024, 6.63 year after the 2017 eclipse.  If it was 10 days further, it would be 6.66 years.  Perhaps the 10 days has some significance because 666 diffidently has end-time significance.  The lines of the two eclipses makes an X through the US. The intersection of the two eclipses happens at Cedar Lake IL (an actual lake, not the name of a town), which is located in the Trail of Tears State Forest, in the heartland of America. The "Trail of Tears” is the name of the infamous deadly march forced upon several Indian tribes from 1830 to 1850, removing the Indians from their traditional lands and forcing them to live on reservations located in Oklahoma; and the name symbolizes all the scattering and abuses of the American Indians by the Gentiles.  Its name now marks the spot that symbolizes the reversal of fortune prophesied by the Lord in 3 Ne 16 and 21, in which the Gentiles will be trodden down and the land will be given to a remnant of Jacob as their inheritance.  The letter X is a symbol for a chiasm.  The chiasm that is being represented is “The first shall be last and the last shall be first”. This will be fulfilled with a remnant of Jacob, who were first given this land, but lost it to the Gentiles, will lastly be given this land again as an inheritance. 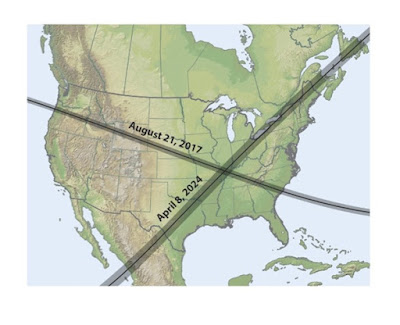 A good landlord will ensure that his property is clean and presentable before allowing a new tenant to rent it.  If a covenant for this land needs to be renewed, this land will likewise need to be sanctified. How will sanctification come about when the inhabitants who possess the land are ripe in iniquity and have defiled it through wickedness?

The 2017 eclipse will occur 33 days before a once-in-7,000 years Revelation 12 sign in the heavens. There is a lot of persuasive evidence that this sign may mark the beginning to the 7-year tribulations. 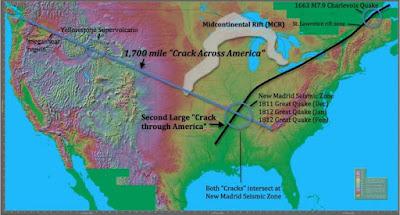 These cracks divide the land of this continent. If the solar eclipse can be likened unto the sword of justice which divides the righteous from the wicked, what does it mean to have the eclipses run along places of divide for our nation?

In the Mosiac sacrificial rituals, the priests would cut open the animal and split it apart in order to wash the inwards parts so that it could be of a sweet savor- presentable unto the Lord. (see Leviticus 1) Perhaps God is signifying that He will divide this country so that He can sanctify the land in order to make it presentable unto the Father.

I don't spend much in my gospel studying speculating the dooms-day destruction of the end of the World.  I'm not going to wait for some terrible day of the Second Coming to see my Lord face to face.  I am trying to get to know Jesus today.

So for the next 7 years, while the whole earth shall be in commotion, and men’s hearts shall fail them, I am going to offer myself up to God as a living sacrifice.  I am going to allow my High Preist, Jesus, to open me up to sanctify and purify my heart.  If my heart belongs to Christ, it will not fail.

I understand that it will be increasingly difficult to recognize and give love in a chaotic world, but that will be the test of true charity.  It will be the magnet that gathers Christ's people while everyone else destroys each other.


My good friend and I were having sacrament the other night.  I was expressing to him my fears of not being able to stand against the trials to come in my personal life because many of the things I have leaned on for support this past year have gone away, and it was a difficult year. While talking about being nervous of not having many of those things in my life this next year which got me through last year he told me, "but you will have a covenant"

The Lord is offering covenant to a people this September.  I am going to enter into it.

I find it fascinating that with all the signs manifesting, God is extending his hand to a people again.

There is an ancient Hebrew custom that took place before a man and woman were married which is intricate but beautiful.  They would meet together with their families and write out a "ketubah" or "marriage contract".  When the contract was finalized they would signify their commitment to be married by drinking a cup of wine.  They would enter into this period called "betrothal" where they were engaged but to remain apart from one another while the groomsman would prepare a place for them to live. (It was often just a room in the groomsman's father's house)  The groomsman would not drink wine until the wedding.

Before the ketubah or the betrothal period would take place both the individuals would participate in a ceremony called "mikveh".  This was a ritual immersion in water that represented spiritual cleansing needed in preparation of the ketubah and betrothal period.

Because I will be entering into a covenant, a ketubah, with Christ and desire to prepare I have decided to participate in my own mikveh through baptism. The signs are being presented to the world warning us of what is to come, calling us unto repentance. Because of the division that will take place on this continent when the sword of Justice falls, I want to be found on the right-hand side of God.  In my personal journey, a chapter of my life is closing while a new one is opening up.  I need Jesus now more than ever.  I need His love and His guidance.  Therefore I desire to repent, which is to turn from ignorance to receive greater light and truth. This covenant is an opportunity for me to repent, and the first fruits of repentance is baptism. (Moroni 8:25) I embrace opportunities to repent because it means I will know God more.  Coming to know Him is my greatest hope in all of this.