THE VAIN IMAGINATIONS OF THE ZORAMITES

WHAT CHURCH DO YOU BELONG TO?

Being able to come home Sunday afternoon from church and talk to your kids about what they learned in primary is just the best! This kid had the darnest things about the Zoramites in Alma 31!

Daughter: “Daddy, what’s a Rameumpton?”
Father: “Well Sweetie, in the Book of Mormon it says it was a place where the Zormamites stood to worship and pray.”
Daughter: “But my Primary teacher said it was a tower that evil people used”
Father: “ Well, I can see how someone would think that.  The Book of Mormon actually just says it was a place for standing which was high above the head and only one person at a time could go up there.”
Daughter: “Was it like a speaker’s stand in church?”
Father: “A speaker’s stand? You mean pulpit?... Yes, I suppose it was.  In fact the word ‘Rameumpton’ means ‘the holy stand’.
Daughter: “….Daddy, what’s so evil about a holy stand?”
Father: “Well Sweetie, it wasn’t the stand that was evil, it was how it was used.  The people gather there in the synagogue and whoev….”
Daughter: “What’s a synagogue?”
Father: “Its just a different word for chapel or church, Honey”
Daughter: “ohh”

Father: “They’d gather in their synagogue one day a week to..”
Daughter: “Which day, Daddy?”
Father: “I don’t know Sweetie.  It just says ‘one day’ and that they called the day ‘the day of the Lord’.”
Daughter: “Sunday!!!”
Father: “Why do you say that?”
Daughter: “Because Sunday is the Lord’s day!”
Father: “Well maybe it was…..Anyways they’d gather there and whoever wanted to worship would go and stand on the top of the Rameumpton.”
Daughter: “Could anyone go up there?”
Father: “Well no, that was part of the problem.  Apparently they had to wear nice clothing.”
Daughter: “You mean like us when we wear our Sunday clothes, Daddy?”
Father: "Well, not exactly but in a way yes, I suppose. Some of us might have a hard time accepting certain kinds of clothes or people in sacrament meeting. But we wear our Sunday clothes to help us be reverent, don't we?"
Daughter: “Yes, Daddy.”

Father: “So anyways, where was I?”
Daughter: “They went to the top of the Rameumpton….”
Father: “Oh yes! They'd go up and worship God by thanking him for making them so special."

Father: “So then everyone would stand at the Rameumpton and say the same thing…”
Daughter: "That sounds like testimony meeting to me."
Father: “Don’t be so irreverent!”
Daughter: “Sorry”

Father: "Then after it was all over they would go home and never speak about God until the next day of the Lord when they'd gather at the holy stand again."
Daughter: “Isn’t that like us, Daddy?”
Father: “No Honey, we have Family Home Evening!”
Daughter: “Oh” 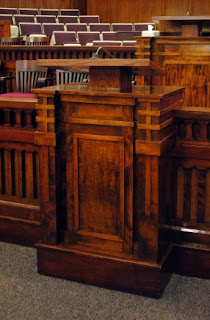 There are only ever two churches that exist on this Earth.

It’s safe to conclude that the Zoramites belong to that great and abominable church. Why?

“Behold the gold, and the silver, and the silks, and the scarlets, and the fine-twined linen, and the precious clothing, and the harlots, are the desires of this great and abominable church.”
(1 Nephi 13:8)

The Zoramaites where puffed in their pride because they sought to look good in the eyes of man, what they perceived as righteousness, and not the eyes God, or what God has defined as righteousness. They sought for gold and silver, or in other words money.  They sought for scarlets, fine-twined linen, and precious clothing, or in other words nice fitted suits and flashy Sunday-best dresses.  The abominable church seeks after Harlots, which defined by the Webster 1828 dictionary is:

HARLOT: In Scripture, one who forsakes the true God and worships idols.
The Abominable church seeks to appease to Harlots, (The world), by changing the doctrine and teachings to conform with what is popular and acceptable in the world.
The abominable church seeks after the praise, admiration, and glory of the world.  They often consider themselves righteous and a light unto a darken world.  The members of the abominable church, because of the amount of superior truth they think they possess, will often elevate or exalt themselves above their fellow Christian believers.  However, that attitude will not allow one to enter into the presence of God; Jesus Christ warned against of such behavior:

“Two men went up into the temple to pray; the one a Pharisee, and the other a publican. The Pharisee stood and prayed thus with himself, God, I thank thee, that I am not as other men are, extortioners, unjust, adulterers, or even as this publican. I fast twice in the week, I give tithes of all that I possess.
And the publican, standing afar off, would not lift up so much as his eyes unto heaven, but smote upon his breast, saying, God be merciful to me a sinner.
I tell you, this man went down to his house justified rather than the other: for every one that exalteth himself shall be abased; and he that humbleth himself shall be exalted.”
(Luke 18:10–14)

Is your church driven by gold and silver, or money?  Does your church make precious clothing, or “Sunday-best”, a requirement to be “reverent”?  Keep in mind the members of that great and spacious building Lehi saw in his vision were dressed in such attire. (1Ne 8:26-27)
Does your church seek to impress harlots, or in other words do they have public relations committees who dictate the decisions or so called “revelations” of your church? Does your church exalt themselves above other Christian and religious denominations?

When we read about Lehi’s dream we often, out of the pride in our hearts, consider ourselves the ones holding to the iron rod and partaking of the fruit of the tree.  We rarely would consider ourselves part of that great and spacious building.  However, the members in the great and spacious building consist of the religiously self-righteous, and like the Zoramites who believed they were correct because they thought they had the “truth”, it can be very hard to self-identify ourselves as being wicked members of that building.

“And the large and spacious building, which thy father saw, is vain imaginations and the pride of the children of men. “
(1 Nephi 12:18)

The definition of vain:

I can’t think of any other people who are more full of “vain imaginations” than the religiously self-righteous. They imagine they right with God when they are in fact not in good standing with Him.  They are ignorant of God’s righteousness and go about to establish their own righteous, but have not submitted unto the righteousness of God. (Roman 10:2-4) Their works are dead and in vain, without effect, fruitless, and empty, because they are not the works of the living God.  Those are they who shall say “Lord, Lord, have we not prophesied in thy name? and in thy name have cast out devils? and in thy name done many wonderful works?” (Matthew 7:22)

Then Christ will profess unto them “I never knew you: depart from me, ye that work iniquity.” (Matthew 7:23)

Does your church imagine themselves to be righteous as they define righteousness through their list man made rules and regulations, which polices are completely unscriptural and hold no doctrinal substance?  Are they like the Pharisee mentioned above, thinking themselves to be righteous because of their fasting, tithing and temple/religious worship? Have you ever unknowingly, like the people of the great and spacious building, pointed and mocked, or treated with contempt and scorn, those you don’t see eye to eye with because they do not live the way you live; because they do not abide to your standard of “righteousness” nor do they take residency in your synagogues, or large and spacious buildings? (1st Ne 8:27)

There are save but two churches only.  Which church will you choose to belong to?