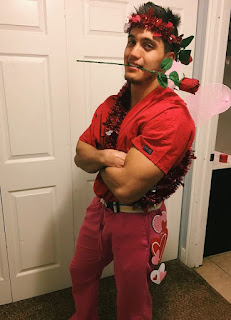 Single people can still have a fun and fulfilling Valentine's Day instead of being bitterly single.
So I decided to dress like Cupid the angel for work today.
A patient of mine always tells me that great learning comes from kindness. I found that to be incredibly true in my life. So choose to be a messenger of Love for the people in your sphere of influence. Minister love to everyone in your life to become an angel on Earth.
Came across this today for the first time while driving to work, very fitting for the theme of my day:
What do you know of angels?
They are heavenly creatures sent by God with wings.
Not all have wings, according to the Bible, there are many different kinds of angels…cherubim, seraphim, warring angels, ministering angels, and then there are the other angels.
“The other angels, you ask?”
The earth angels are those who walk the earth in flesh and blood, His earth division…different but angels nonetheless. In the Hebrew Scriptures, the word for angel is malakh and in the New Testament, the word in Greek is Angelos. ‘Then spoke Haggai, the Lord’s malakh.’ And of the man known as John the Baptizer, the Messiah said, ‘This is He of whom it is written, “Behold I will send My angelos.” Haggai and John were both of flesh and blood, and yet they are both called angels-angels of God.
An angel is a ‘being’ sent by God, a messenger, an emissary on divine assignment, bringing God’s message. So who are the earth angels? Those who are born again and bear the message of heaven to those who dwell on earth. The message is “The Good News,” in Greek it is called the euangel, in English the evangel, as in evangelism. Within each of these words is another word. Yes, the word angel, it is no accident, for if you will bear the message of heaven to those of earth, your life will become angelic.
Today be someone’s angel and start fulfilling your angelic mission by spreading the good news of the Kingdom. Let us represent the Kingdom well…
-paraphased from Johnathan Cahn, "Book of Mysteries", Chapter: The Mystery of the Secret Angels
Posted by Khaden Reed at 10:49 PM