The Mountain of the Lord

This is a concept I once received while crying unto the Lord over my weaknesses. Today while worshipping in the Utah Valley University prayer room this analogy was again used to teach me some more important things. 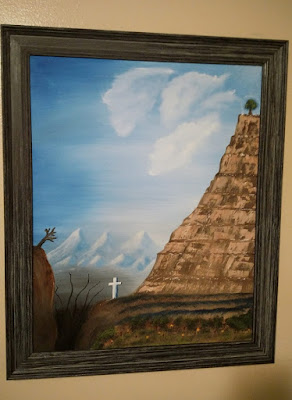 There is this mountain that must be climbed because at the peak is where we will meet our Lord.  It is the Mountain of our Lord and the way to salvation is to arrive at its summit.  The way up is rugged and rough and it will require strenuous effort on our part to reach the destination.  At the base of this mountain, there is a deep, massive, cavernous pit.  The path into the hole is initially smooth and level but becomes more and more steep and treacherous until finally, it becomes a sheer cliff.  Its depths are unfathomable.  The darkness of the hole is so thick not even light can escape its jaws.  This is no ordinary pit.  It is the gulf of misery and endless wo.  It sucks and extinguishes light because in its depths lies a black-hole.

A black hole is a former star.  A star is a sun which is the source of energy for a solar system.  Our sun gives off 3.86 x 10^26 joules/sec. (that’s a lot!)  The sun is constantly giving its light and glory away providing energy for all planets in its orbit.  A fallen star does not share its light and energy.  Instead, this star consumes its own light and collapses in on itself.  It then consumes everything around it.   It does not surrender its glory, instead, it seeks to keep the honor for itself.  Satan was once a star but fell because he had not charity.  He is now enslaved by his own hatred and seeks to make others miserable like unto himself.  Like a black hole, he sucks the life and energy out of others to feed his never-ending appetite of pain.

The closer you get to the great pit, the stronger its pull becomes, and the more susceptible you are to being dragged in.  The lower you go down the mountain, the less light there is.  Its base is encompassed by a mist of darkness.   Demons are rampant in these lower elevations because darkness is where they thrive.  Not only do demons prowl here, but many lost and wandering souls reside in the abyss.

I’ve climbed a little ways up this mountain, but I am still too close to the great pit.  On days where I am fatigued I feel its ever-present pull.  Those are the days I get ransacked by demons.   I’ve learned that you can never get rid of the demons, you can only learn to live above them.  They are much easier to defeat, to crush their head under your heel, from higher ground.  So despite their attacks, I will continue to climb upwards.


It is dark where I am, and although at times greater light breaks through and I can see my destination through the foliage, it is still often dark and difficult to see.  During those dark times, the only thing I have to light my way is this flame on a candle stick.  It's surprisingly a very durable candle because it doesn’t really melt, but I do have to safeguard and treasure the flame from being extinguished.  It is a tedious task but it gives sufficient light to continue my hike.

I am blessed because of this flame God has lit for me, but there are others around who do not have any light to guide their way.  I know I am supposed to share the light for all to see and perhaps use the flame on my candle to ignite their own candles, but I am apprehensive.  Like the wicked and slothful servant, I am afraid that I may lose what little light I have in an attempt to share and multiply the light around me.  Because I feel fear, shame, and unworthiness I place my candle under a bushel, or in other words, I hide my single talent in the earth.  This makes me no different than Satan because instead of sharing the good light can offer, I suck it in for myself.

Which is self-defeating because a flame needs oxygen to live.  If you hide a flame under a bushel, you limit the oxygen it receives. You actually increase the chances of it dying.  But if you go out and share your light with others, lighting their candles and embarking on this upward climb together, more light is created for everyone.  If your flame does blow out, you now have the flames of others whom you shared your light with to reignite your flame.  Surely, the journey up the mountain of the Lord is much better if you bear one another burdens and share what light you have been given.

However, it may appear that there is no one to share the light with because most people are ignorant and complacent living in the dark, and out of those who are aware there is a mountain, only few will make the effort to climb. It makes the trek lonely and difficult.  At times it leaves me exhausted and defeated, collapsed on the ground.   The beautiful thing about mountains is that although they are wide and broad at the base, they become more and more narrow the closer you approach the peak.  As you continue to climb, you will meet others who have embarked on the journey to meet God.  Although you may have started the hike from completely different locations, there is only one summit which will bring your paths together.  So don’t give up, pick yourself up, keep that fire burning, share the light, let it shine, and those who are seeking will be drawn out of the dark to it.  Continue the upward climb!